A show at the Lettering Arts Centre in Suffolk will delve into the art of alphabets, tracing the history of communication design from ancient symbols to the sophisticated systems we have today.

A new exhibition will explore the origins and evolution of one of mankind’s most intuitive and important inventions – the alphabet.

Curated by lettering artist Eric Marland, The Alphabet Museum will take place at Suffolk’s Lettering Arts Centre, and will delve into the history of our written communication system, including the ways artists and designers have used and manipulated it through the ages.

Featuring roughly 50 exhibits, the show will look at the connection between symbols and sounds, and the journey from hieroglyphs to the letters we use today, featuring examples from across the world.

Marland first began delving into the history of alphabets after being inspired by the work of David Diringer, a linguist and author who wrote books on the world’s different lettering systems.

“I have been a letter carver for 30 odd years and only in the last four or five, have I actually started looking at the tools of our trade – letters – and where they come from,” says Marland. “It is something I have become increasingly interested in and quite obsessed by. I am hoping to raise the profile of the alphabet.”

“Lettering has become so ubiquitous”

Letterers and typographers have had a huge role to play in the evolution of the alphabet, he says, and Marland hopes the exhibition will shine a light on their work.

“The problem with lettering is that it has become so ubiquitous,” he adds. “We just take in messages without thinking about the medium – it is a great subliminal tool. If politicians set out information in a classical [typeface] it has one meaning, but if they write without serifs it will take on a different urgency or meaning. If it wasn’t important, there wouldn’t be so many [typefaces] that exist. Lettering is a secret weapon.”

In his view, the letters of the alphabet are as much a tool of the trade for artists as a pen or chisel. The Alphabet Museum exhibition will feature a variety of works, both new and old, including drawings, carvings, glass, wood and axe work. It will look at a range of alphabets including Greek, Roman, Hebrew and Persian with works from the UK and abroad.

Exhibits will include “Cutting Through Time”, by various letterers including Marland himself, who have each carved a series of letters in different styles from history; a calligraphic-style alphabet inspired by medieval British manuscripts, carved by Robyn Golden Hann; a unique interpretation of the Japanese alphabet, by Emi Gordon; a geometric alphabet, by Tom Perkins; a runic alphabet, by Russell Purdham, and many more.

From pictogram to letter

While the Lettering Arts Centre is usually quite minimalist in the layout of its exhibits, this show is expected to be a “wall-to-wall” of alphabets, says Marland, which will demonstrate everything from ancient, communicative symbols through to fully-formed letter systems.

“Modern Chinese has over 40,000 different characters – they are basically pictograms,” says Marland. “Chinese children learn to read much later as they need to memorise thousands of characters to form their vocabularies.”

The journey from pictogram to letter passed through stages, he says – from a picture, to a symbol, to the sound of the symbol. He said the letter “A”, for example, stemmed from an ancient word for ox and “if you turn the letter ‘A’ on its head, you will still see a sort of upside down cow”. This journey is shown through one exhibit in the show, “A is for Ox”.

Alphabets have changed over time

Marland believes that “history only begins with the invention of the alphabet,” and one exhibit that looks to capture this concept is “The Father Catich Alphabet”, designed by 20th century calligrapher and priest Edward Catich.

Catich based his alphabet on Trajan’s Column, a column in Rome, Italy that was built in 107 AD to commemorate Roman emperor Trajan. The column features inscriptions and carvings from the period, including elements of Trajan lettering.

Using this as inspiration, Catich carved an alphabet in slate that demonstrates the letters that featured in the Trajan alphabet, and also those that did not feature. These are set in a different colour to distinguish them.

“The letters “Y” and “Z” were only needed after the Romans conquered Greece to say some Greek words,” says Marland. “That’s why they appear at the end of the Roman alphabet.”

Letters will continue to “morph and evolve”

While alphabets and lettering have seen many developments over thousands of years, Marland says that the evolution is unlikely to stop anytime soon, adding that new technology is likely to “morph” the alphabets we now know.

The change of letter arrangements on computer keyboards from chronological to the “Qwerty” formation is one example of this evolution.

One theory for this, Marland says, stems back to the age of typewriters – certain keys would jam more frequently if they were laid out in a certain way, but the Qwerty arrangement seemed to solve this, so the design stuck, despite perhaps not being the most efficient layout.

But as technology moves on and people increasingly type on buttonless phones with just their thumbs, change and new keypads may not be far off, he adds.

Until then, the vast and illustrious history of lettering in all its iterations can be explored at the Lettering Arts Centre’s new show, which aims to demonstrate how complex, intricate and ingenious communication systems really are.

“Think about how amazing it is that we can spell any word with just 26 symbols,” Marland says. “It seems obvious now but until someone came up with the idea of an alphabet we had to use lots of symbols to convey messages, such as Egyptian hieroglyphs. I think the alphabet is humankind’s greatest invention.” 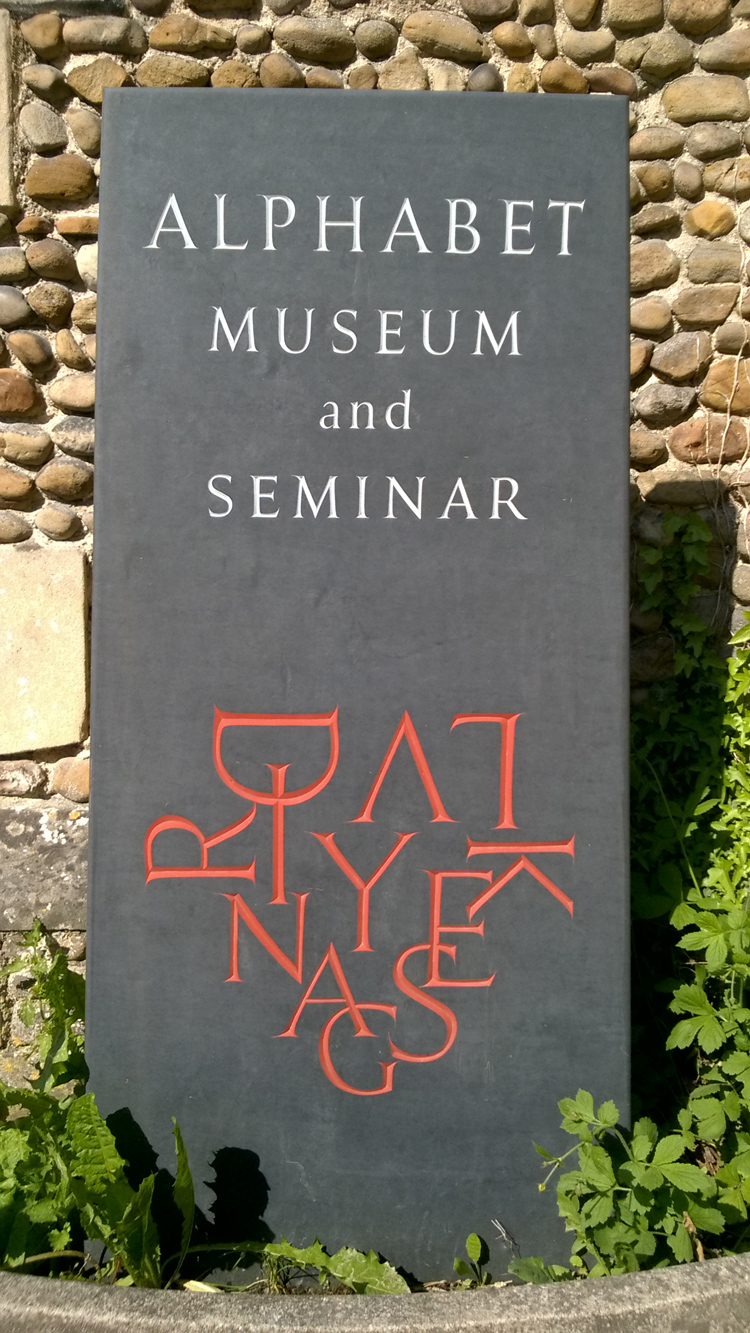