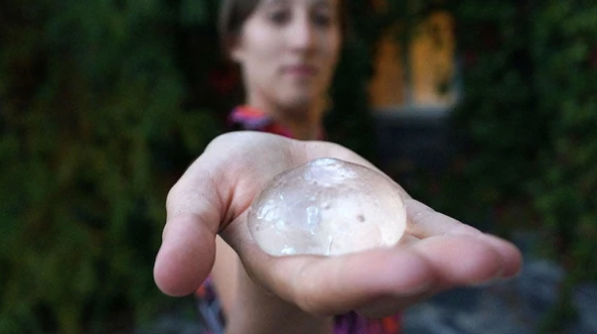 One way to stop the ever-growing pile of plastic water bottles in landfills? Make a bottle people can eat.

The container holds water in a double membrane using "spherification," the technique of shaping liquids into spheres first pioneered in labs in 1946 and more recently popularized by chefs at elBulli in Spain. It works a little like an egg yolk, which also holds its shape using a thin membrane.

“We’re applying an evolved version of spherification to one of the most basic and essential elements of life--water,” says Rodrigo García González, who designed the Ooho with fellow design students Pierre Paslier and Guillaume Couche.

A compound made from brown algae and calcium chloride creates a gel around the water. “The double membrane protects the inside hygienically, and makes it possible to put labels between the two layers without any adhesive,” García explains.

While the package is being formed, the water is frozen as ice, making it possible to create a bigger sphere and keeping the ingredients in the membrane and out of the water.

Why not just drink from the tap? The designers wanted to address the fact that most people are drinking water in disposable bottles. “The reality is that more and more, when we drink water we throw away a plastic bottle,” García says. “Eighty percent of them are not recycled. This consumerism reflects the society in which we live.”

By rethinking the bottle, the designers say it’s also possible to reduce cost; for manufacturers, most of the cost of producing water comes from the bottle itself. The Ooho can be made for just two cents.

Like other edible packages, the Ooho seems to have a few challenges--like how the package stays clean before you drink from it and potentially eat it. But others have made it to market: the edible Wikipearl is now available at selected Whole Foods. WikiFood skins are inspired by the way nature packages fruits and vegetables. These skins are delicious protective coatings against water loss and contaminant entry, and potential carriers of effective and functional nutrition.

The other problem with Ooho, as you can see from the videos, is that you're going to get some water on your face, clothes, and the table. That's the sacrifice you make for getting rid of water bottles from your life.

Even if bottled water companies don't switch to Ooho, the designers say they hope people will try making the packages at home. "Anyone can make them in their kitchen, modifying and innovating the recipe," says García. "It's not DIY but CIY--cook it yourself."

The design was a winner of the second annual Lexus Design Award and will be on display during Milan Design Week.

Article by Adele Peters via Fastcoexist.com