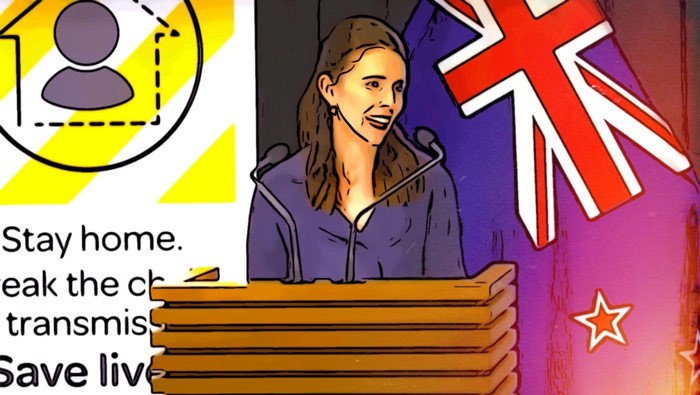 LONDON, Thursday: New Zealand’s Covid-19 comms have been clear, kind and cleverly sporty – and marketers and leaders should take note as we enter the next phase of the response, writes Cheil’s NZ-born global CCO Malcolm Poynton in an LBBOnline piece entitled Why We Should All Learn from Jacinda Ardern.

“As the UK waits nervously, face masks at the ready, for news of a possible easing of the lockdown, many Brits are looking to New Zealand – and specifically its prime minister Jacinda Ardern as an example of a leader who is steering her nation through the pandemic with enviable levels of clarity, consistency and calm,” he says.

“I’m a native Kiwi, and I can confirm that New Zealand is not short on machismo.

“It’s a sports-mad nation of farmers, foresters, America’s Cup sailors, and the world’s most successful rugby team. So it’s still a pleasant surprise to some of us that our leader is a 40-year-old woman with plenty of heart and the grey matter to match, who just happens to be one of the world’s great communicators.

“Ardern’s response has been very different to many older, male leaders of larger countries, who appear to be torn between saving their own skin, saving the economy, and saving lives, and who treat the pandemic as an opportunity for political point scoring and dishing out blame.

“Having listened to her expert team (something many of today’s world leaders find foreign) Ardern rallied quickly and calmly to lock down the country. She launched a national communication campaign that was unequivocally clear, totally cohesive across every touch point, and resonated instantly with a mass audience. On that front, she delivered with a success that every global brand dreams of.

“Our leader is a 40-year-old woman with plenty of heart and the grey matter to match, who just happens to be one of the world’s great communicators.”

“Ardern knows the psyche of her sporting nation and the overarching Covid message reflects this with a rallying cry for all New Zealanders to Unite against Covid-19.

“With a clear opposition to beat, the Covid game-plan and playbook were easy to land. ‘Stay home. Save lives’ underpinned the 4 Level Alert System that lays out behaviours and advice for each stage of the response. All part of comms toolkit pushed out to ministers and businesses to post socially.

“This sounds super simple because it is. Just how we Kiwis like things.

“Ardern’s real knack has been to unite the country through language, introducing the concept that each household is a bubble and encouraging everyone to Stay in your bubble and Be Kind.

“Nothing dramatic, no fear-mongering, instead a tone that reminds everyone she understands the challenge and that we’re all in this together.

“The bubble image is part of the graphic language of the information campaign, and the phrase is repeated in almost every conversation across the country: it makes some people laugh, some roll their eyes, and others mock, but at the end of the day, it makes everyone think at every moment about who they are with and who they should be avoiding.

“You see the words Be Kind on motorway signs and even hear Be Kind become part of the political discourse as talk shows debate the issue of Commercial Landlords vs Businesses that are holding on by a mere thread.

“Ardern’s compassionate tone as a leader is breeding compassion amongst others.”

“I’m a native Kiwi, and I can confirm that New Zealand is not short on machismo.”

“As a great communicator, Ardern’s regular daily briefings are a lesson in transparency, and consistency. Instead of treating the public like the great unwashed and using the broadcasts as a channel to pump out her own messages on repeat, she listens to questions, responds where she can (with real facts), and follows up later when she needs to.

“This level of communication is sustained way beyond the daily briefings. Ardern’s reassurance to kids that the Easter Bunny is a key worker is now legendary, but she is equally skilled at reaching every part of the population. She sparingly but effectively uses sporting analogies that manage to avoid sounding frivolous, so when she says things like, ‘We may be ahead at half time, but the game isn’t won until full time’, and refers to the possibilities of losing in the last quarter, New Zealand sports fans take note, as they wince at memories of the occasional and all-the-more painful national defeats.

“In short, Jacinda and her communications team check every box a global brand could wish to tick, whether there’s a crisis on or not.

“Yes, her response to the pandemic has been outstanding, but she’s risen to the challenge using skills that are timeless, and with a transparency, understanding and courage that provide a template for marketers (and other leaders) as we move on to the next phase of the Covid-19 response.”