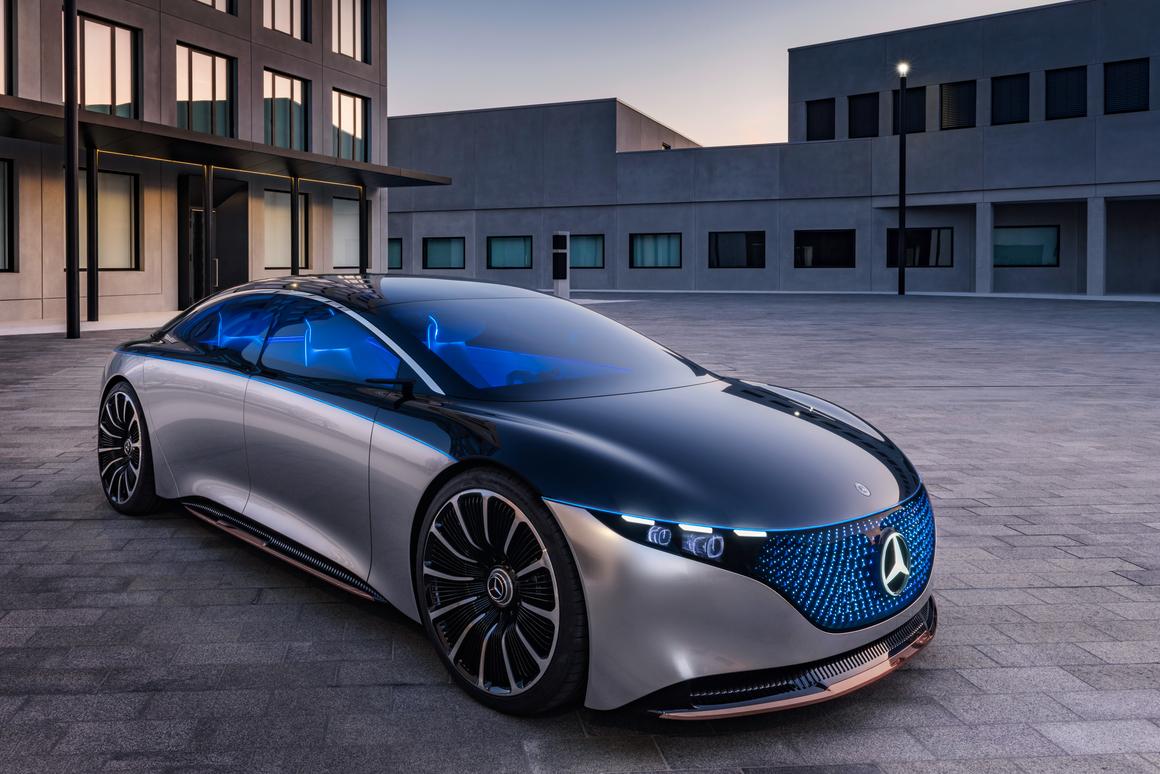 A vision for the future of luxury, in liquid metal, back glass and thousands of 3D LEDs
Mercedes-Benz

It looks like liquid metal, topped in black glass. Thousands of LED highlights pepper the exterior in a digital "lightbelt" that incorporates the tail-lights and creates a spectacular 3D grille. It's Mercedes-Benz's new vision of a luxury electric future, obsessively detailed and super-slippery, and the Germans say it's a monument to cars you'll still want to drive, even once they can drive themselves.

The company certainly seems to be zeroing in on a design aesthetic for its future electrics, if the Vision EQ Silver Arrow and F 015 concepts are anything to go by, and the aesthetic is this: assemble shiny silver metal into curvaceous, aerodynamic forms, pepper it with LED-lit star logos, and highlight it in fine detail and jet-black glazing.

Personally, I think it's a pretty compelling look; you could stick the Vision EQS straight into a sci-fi movie and you wouldn't be questioned. It looks like it might self-heal if you shotgunned a hole in it, then get back to looking for Sarah Connor.

As an EV platform, it doesn't really rock much that'll excite you. Two motors give a combined 350 kW (470 hp) across the front and rear axles. It's quick, but nowhere near Tesla quick: 4.5 seconds to 62 mph (100 km/h). It's not here to make your cheeks flap and your passengers gurgle in fear, it's about dignified luxury with an elegant degree of performance that raises eyebrows instead of pulses.

The battery – not that battery figures are even remotely relevant when it comes to show cars like this, but we'll play along – is said to be good for a WLTP range of 435 miles (700 km), and if you plug it into one of the world's fastest chargers, assuming there's one in your neighborhood (there's not), it'll go from 0-80 percent charge in "significantly less than 20 minutes." Righty-o, then.

No, the fun here is in the lighting, particularly the exterior lighting. There are 229 individual star lights on the rear of the car, graduating from small to large as they approach the middle, that form a tail-light cluster that softly pulses and shimmers. There are whisper-thin LED strips up the sides of the car that offer further motion at a standstill, and it all leads toward a truly stunning art piece of a front end.

When the car's turned off, there's no grille – it's a glossy black void. When you power it up, 188 circuit boards, each with five LEDs and a star, light up to create a three-dimensional array of 940 light points.

These look utterly spectacular even before motion is added, but can light up in all sorts of patterns to "allow interaction between the vehicle and its surroundings" and generally hypnotize the public. I know that I've just been banging on about an overly attention-grabbing grille on the BMW Concept 4, but this feels like something from 2030.

It doesn't stop there, either, the headlights contain "holographic" 500-LED arrays set to spin at 2,000 rpm, creating the impression of floating, changing shapes behind the smooth, glassy exterior. I mean, just wow. 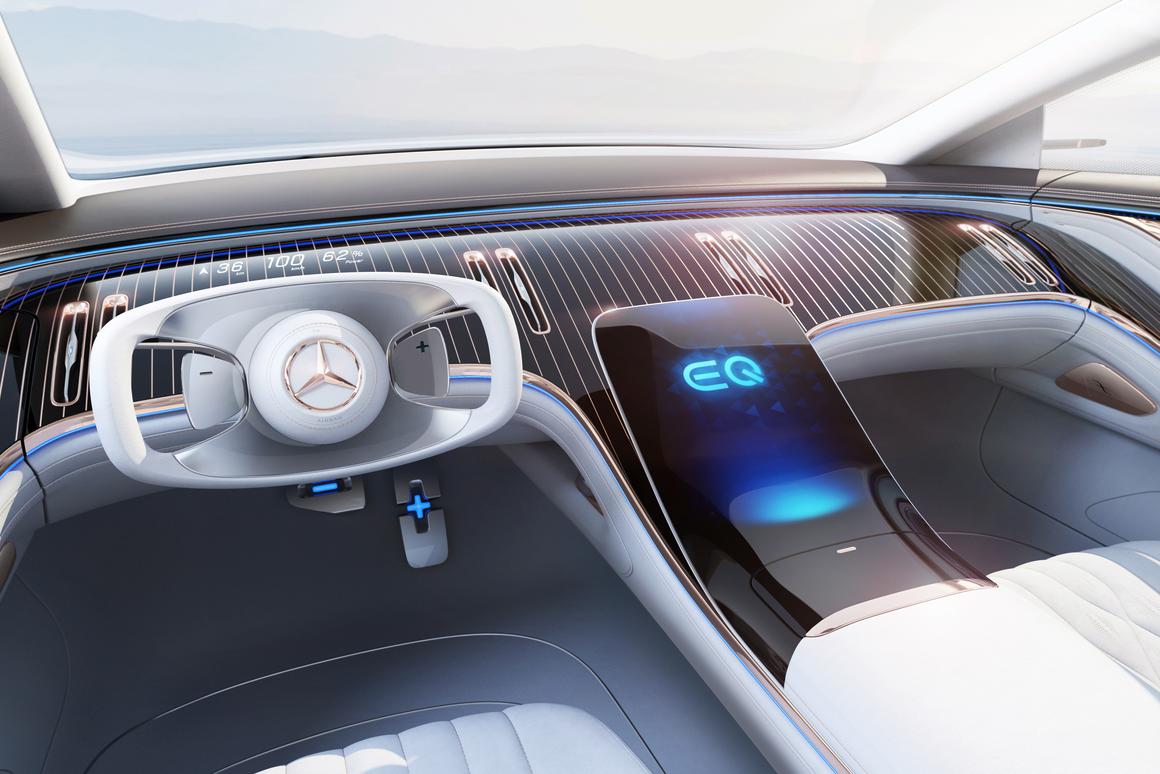 No buttons, it's all touch and voice, right down to the window openers
Mercedes-Benz

The interior is no less futuristic, inspired by the gentle curves and clean whites of the luxury yacht world. Scroll through the mini-gallery above (yes, this story has two photo galleries, one for the interior and one for the exterior) to enjoy the peacefully bendy touchscreens, the entertainment screens that gradually emerge from the fabric of the seat backs, the pinstriped, solar-looking, non-solar dash and the intricate matrix of star shapes running along the door trim. There's not a lot of buttons, everything's voice inputs and glossy touch screens, right down to the window buttons.

Where does it all lead? Who knows? It's by no means a production car, and some of this stuff looks so insanely finnicky that it'd probably shake itself to bits if you drove down a bumpy road.

It's probably best understood as an art project that's been undertaken by some of the actual people that will be working on the Mercs of the future, showing off some of the chops they'll be bringing to the next generations of luxury cars. Props to this team for creating something truly special.

Don't miss the video below to see this thing in motion.