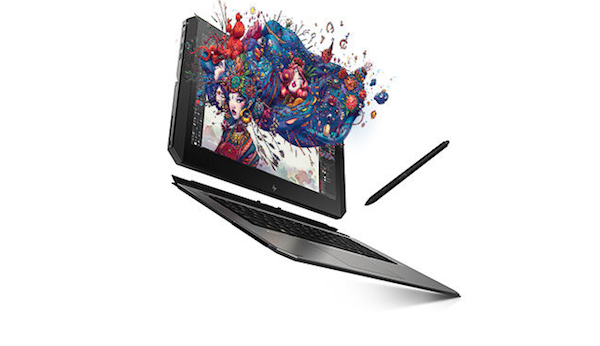 If you are a graphic artist and find yourself needing a ton of power on the go but not a Surface Pro 2 fan, HP may have the answer.

HP worked with digital artists, designers, and engineers to design and build the ZBook x2. HP’s goal was to build a tablet that supported all the creativity of a tablet and stylus but with enough power to serve as the primary computer. No more migrating workflows between devices; the ZBook x2 would be able to do it all, whether it be graphics, CAD, or video production.

It has a range of processor options, topping out at the “8th generation” Kaby Lake-R Core i7-8650U: a four-core, eight-thread chip running at up to 4.2GHz. It can have up to 32GB RAM. The chip has an integrated GPU, of course, but the ZBook also has an Nvidia Quadro M620 with 2GB of dedicated video memory. The ZBook can pack in up to 2TB of PCIe SSD storage.

There are two screen options; both are 3840×2160, 14-inch multitouch IPS displays with reduced glare. HP’s stylus uses Wacom’s technology for 4,096 levels of pressure sensitivity and tilt support with no pen battery required.

It has both a smartcard reader for corporate authentication and an SDXC card reader. There is a 720p front-facing camera with IR support for Windows Hello facial recognition and a rear-facing 8MP camera.

It also has Thunderbolt 3, with two USB Type-C Thunderbolt 3 ports, alongside a USB 3.1 generation 1 Type-A port, HDMI 1.4, and a headset jack.

Prices start at US$1,749, and the ZBook x2 will become available starting in December 2017.