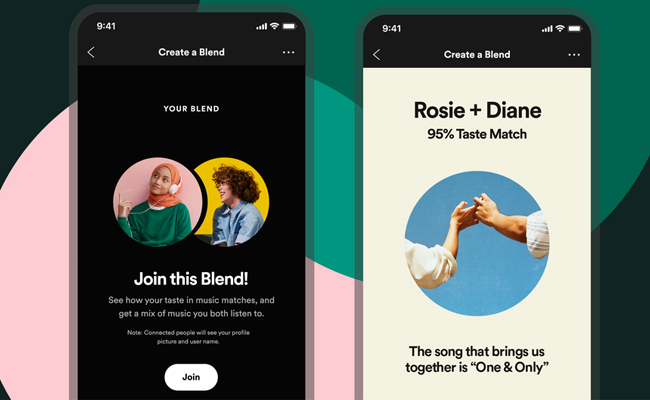 Capitalizing off of the success of personalized music features like the year-end Wrapped playlists and more recent Only You listening hub, Spotify is officially rolling out Blend, a personalized playlist that will allow friends to discover the ways their tastes in music overlap.

In beta testing since June, Blend is officially rolling out to all Spotify users on Tuesday. The new feature will allow users to choose friends to “blend” their musical tastes with, and will then construct personalized playlists based on the songs that make up the Venn diagram of both users’ favorites.

On mobile, users can access the feature by navigating over to the Made For You hub and tapping Invite to send an invitation to connect to any friend with a Spotify free or premium account. Once your friend accepts the invite, Spotify will algorithmically generate a custom track list made up of songs you’ll both love and additional recommendations that take your shared listening preferences and tastes into account. According to Spotify, premium users will also be able to easily tell which friend contributed which songs, since those playlists will list which user’s listening preferences inspired the song selection.

When two users create a Blend—we’re going full proper noun on this one, I guess—they’ll also receive what’s known as a “taste match score,” which will grade how similar or unique their listening preferences are, as compared with those of their other friends. As with Wrapped playlists and the Only You hub’s Audio Birth Chart, users will also be able to share the data stories Blend produces across social media channels.

Spotify’s data-collection playlists have seen considerable success since Wrapped debuted back in 2018, prompting the streaming service to expand its personalized offerings to include playlists making up users’ “audio birth chart” and “dream dinner party.” The finished products are fun and highly shareable, ultimately creating a sort of viral feedback loop that Spotify is undoubtedly all too happy to use as free advertising for its own platform.