It’s no secret that architecture and design are implicit in having helped propagate this global crisis. But, the industry also possesses the tools to rectify its involvement. This year’s Milan Design Week revealed an industry fresh out of the pandemic, more aware of its responsibility, and ready to tackle the myriad of issues surrounding sustainability.

Throughout the city-wide event—counting more than 300,000 visitors from June 6th to the 12th—commercial and cultural activations put new methods of upcycling, fresh approaches to production, and human’s overall relationship with nature on full display. Anchoring this exhaustive program was The Salone del Mobile, back in full force and scale to celebrate its 60th edition. The leading furniture, bathroom, kitchen, and lighting fair took its exhibitors to task, verifying that they aren’t just talking the talk but also walking the walk. As reported earlier this year, the event’s president Maria Porro noted that change takes time. The fair has implemented specific requirements to participate but plans to incrementally introduce stricter guidelines in the years to come.

“After fast fashion, the construction and design industries account for the biggest amount of waste. We need to accept that using upcycled materials and better processes will change the look and feel of the buildings and products around us,” said Italian architect ​​Mario Cucinella. His Design with Nature installation was the centerpiece of this year’s Salone. “[It was] an installation in which we [aimed] to show that our vision of the future needs to be ecosystemic and capable of bringing knowledge, skills, and technologies together for a new generation of materials and design.” The topographic landscape—built using planks of carefully-sourced wood—operated as a lecture hall, a library of new sustainable materials, a lounge, and a food court offering meals made using local produce.

The architect aimed to promote the ideas of full circularity and ecological transition in which cities, rather than the earth itself—become mines for raw upcycled material. This dynamic installation highlighted what has already been done but also served as a call to action for designers and brands to do more. 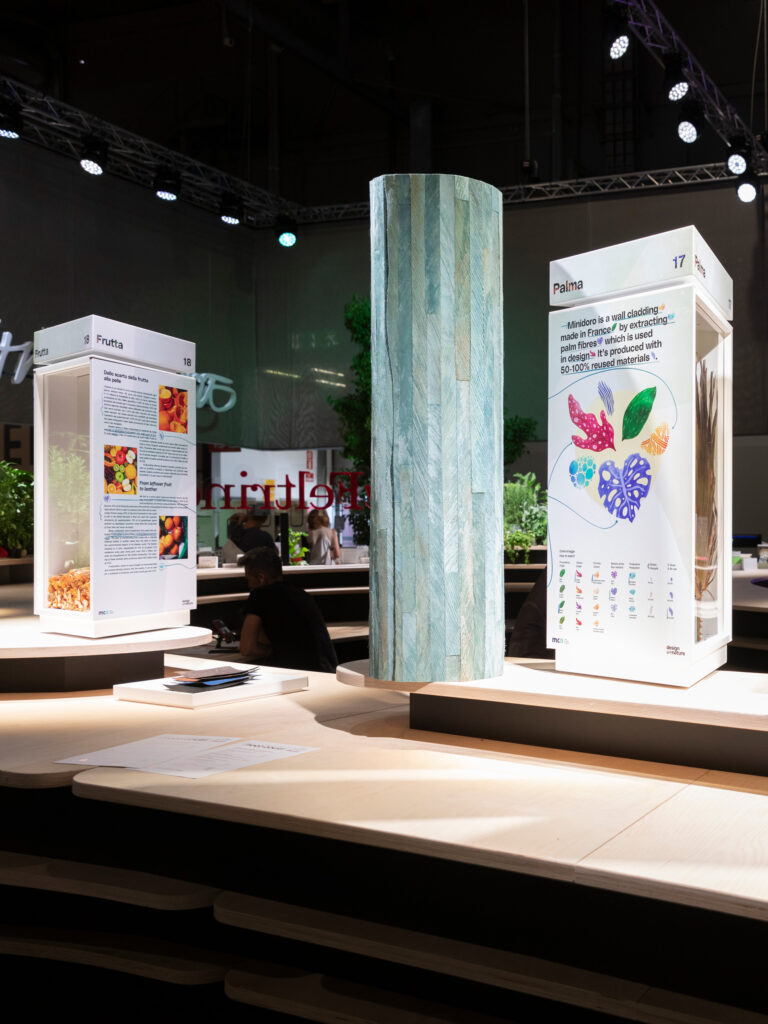 Though the fair had a robust offering with its2,175 exhibitors, a lot of the excitement also took place in Milan’s city center. Upcycled material could be found everywhere. Los Angeles-based Otherside Objects debuted at multi-exhibition venue Alcova with its salvaged wood outdoor loungers. At Certosa Initiative, Israeli studio Studio RDD revealed a new use for the millions of disposal face masks that have accumulated on the planet in the past few years. The practice has envisioned an easy way to repurpose them as upholstery. Moroso teamed up with Dutch designer Wieki Somers to develop the Somewhere collection—a series of daybeds and modular bookshelf using Kvadrat Really upcycled wool and cotton textile boards.

Milan Design Week has always been about dramatic, immersive set designs. This year’s edition featured biophilia and forests as common themes. Few exhibitions or product displays did without floral or plant-based arrangements. Perhaps the most striking of these was Montreal-based lighting studio Lambert & Fils mounted and DWA Design Studio-conceived Caffè Populaire installation complete with plantings and flower-based wallpaper funrished by New York-based studio SUPER FLOWER. Also staged at Alcova, the aperitivo garden came complete with fountains and various applications of the brand’s new Silo Collection. Calico Wallpaper teamed up with AB Concept and NUDE Glass to launch its latest Tableau collection. Embedded in an indoor garden within the Orobia 15 venue, FLOS introduced the Nicta collection. These outdoor bollards are carefully calibrated to emit light so as to not disrupt certain biorhythms and animal movement patterns.

Renowned architect Stefano Boeri mounted an actual Floating Forest in the Darsena canal. This unique installation was meant to inspire a sense of awareness and remind Milan Design Week visitors of the value of nature.

Indeed, the number of new products and projects using sustainability in some form or other was staggering. The overall focus on this topic didn’t stop there. Noted design duo Formafantasma hosted the Prada Frames symposium throughout the week. The program took a scientific look at the complex relationship between the natural environment and design; the parameters in which the timber industry operates today. Speakers included noted curator Paola Antonelli, creative director Beatrice Leanza, and designer Alexandra Daisy Ginsberg, among other critics and experts.

The idea of sustainability was also expressed in how some traveled to Milan Design Week 2022. London-based PR firm Zetteler endeavored to reach Milan via high-speed rail rather than short-haul air travel. Perhaps the trend will catch on.